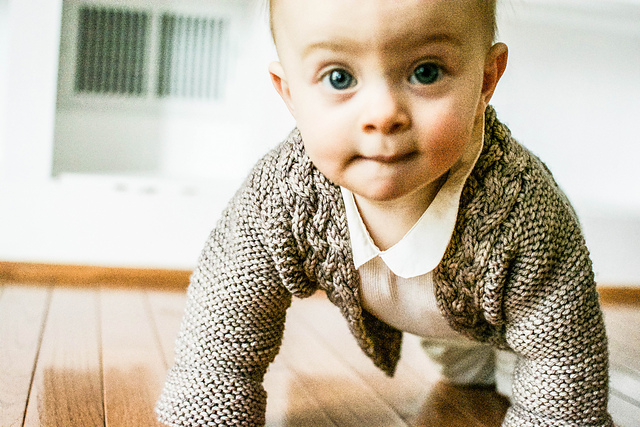 The New kid, this post’s cover picture, didn’t want me to scroll any further in the list of designs on offer for the Gift along and I had to see more of Kathryn’s designs. Like this one for example! I also love how Kathryn is modelling her own designs!

Kathryn is originally from Cincinnati, Ohio but lives the moment in Tanzania with her husband and two boys (4 and 2).  She has a bit of wanderlust and is very much enjoying being able to explore Africa. Pregnancy was her kickstarter for designing. She carries around a sketch book wherever she goes.

At the moment her inspiration comes from the world around her.  Kathryn’s last four patterns released were all inspired by carved wooden doors in Zanzibar.  The world is a beautiful place.

I was quite suddenly overcome with the need to knit a baby blanket for my impending arrival.  The only problem was I didn’t know how to knit.  Nor did anyone around me.  We were living in Malaysia at the time and when we went to the US that summer I went to a big box store, bought some yarn and needles, and sat down with YouTube videos to work out the process.  That blanket was stiff as a board and somehow ended up with five corners but I was hooked.  I have not put the needles down since.

My first design was Giant’s Causeway.  I was pregnant again and had a very specific idea in my head of what I wanted to knit for a baby blanket.  I couldn’t find anything close enough to modify into what I wanted so I put the pattern together myself.  Much like when I learned to knit, I was hooked.

I design usually me or my boys. Occasionally a niece of nephew.

This would be kind of difficult.  It’s mainly hidden away in the back of closets and anywhere I can find space.  One day I’ll have a dedicated single space for it and then I will be living the dream. Yarn is my cryptonite.  I have zero self control in that department.  Zero.

A couple of things.  There are far too many designers in the GAL to mention in one post. My queue has more than quadrupled.

I’m working on a sample for an upcoming pattern.  You can see pictures of that on my instagram (@kfolkerthknits). For the GAL I’ve just cast on Brenda Green’s Winter Booties.

When the booties are finished I am planning to cast on Julie Hart’s Winslow Hat for my two year old.  We are heading to the US for Christmas and the poor kid doesn’t own a hat.  We live on the coast where temperatures don’t drop below 24 C/ 75 F.