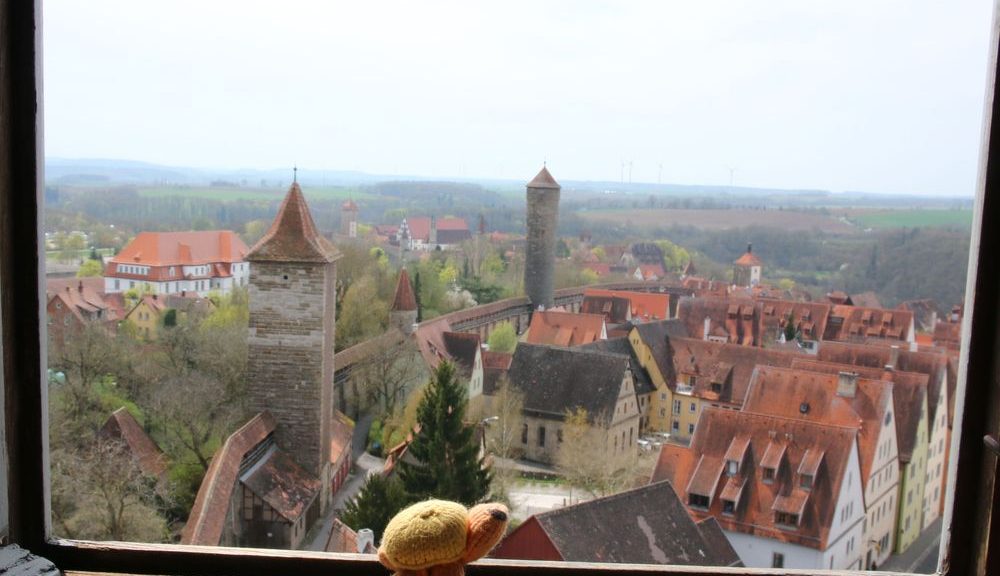 Finally the bags were packed and the holidays could begin. Leaving the never ending Swedish winter and grey weather behind for a few weeks was much needed. Travel Turtle was ready to see some new places and..

…go yarn shopping!! Oh yes. After more than 16 months of yarn diet (read blog post here) it was about time to go and catch some new fibres for the stash. What better way to do so in combination with a holiday in the South?

We picked the Yarn Festival in Hohenlohe for our starting point. First off because southern Germany was never much on my travel itinerary so far and it holds a few incredible treasures to see and explore (I’ll show you in a bit!) and secondly because it was a great place to meet with some members of our Ravelry group.

Our first stop was Nürnberg / Nuremburg. This beautiful city boasts a large castle and a beautiful medieval city centre (much of which has been bombed to ashes during WW2) and plenty of history. I also hear that the bard’s festival is a thing to enjoy with the castle as a backdrop!

Or you simply go and enjoy the city and it’s beautiful corners (and yarn shop – Tolle Wolle has an amazing selection of yummy yarns. I  was hard pressed not to go shopping already.)

But since the yarn festival was just two days out I decided to keep it together.

So we continued on to the most beautiful of small towns, called Rothenburg ob der Tauber. A place generally crawling with tourists if you come in summer, but since this was officially still spring (although it was 27 degrees C already!) we were lucky to skip the tourist crowds and have this gem almost to ourselves.

And what a gem it is! I was already under the impression that there is no city more beautiful than Visby on Gotland (read here) but Rothenburg exceeded my expectations by far.

With two small children in tow we were lucky to be able to enjoy the early morning hours al. The city is stunningly beautiful. Medieval to the bone, with a walk-able city wall and set on top of a hill with incredible views all around. A word of advice: If you’re coming with strollers or wheelchairs, be warned that cobblestones are the main pavement throughout the city and the wall is only accessible on foot.)

The best way to explore this city is to a) follow the big round tour (you can find it on a map in the tourist office) or b) simply to get lost in the small streets and wander around. But you should at least once go outside the city walls to enjoy the view from the other side (also there is a pretty cool playground on the western side of the wall, in case you are travelling with small ones).

A climb up the city wall’s highest tower will be rewarded with an incredible view over the whole city. Make sure to plan at least for two or three days here so that you can enjoy all corners of this beautiful place.

I would be lying if I said I didn’t plan for a stop at Schoppelwolle’s factory on the way to the yarn festival. Conveniently situated just on the road to Hohenlohe, in Wallhausen (just 10 minutes from Hohenlohe) we had to stop for a small shopping frenzy. I love these gradient Zauberball yarns and since they also sell production leftovers (OOOH YESSS) and minor balls of yarn they cannot sell in other shops this was the ideal place for me 🙂

Although I personally find that the yarns could be presented a lot nicer (you’ll have to dig into the boxes to see the colours sometimes) the lower prices of the yarn are good reason to stop and shop. And most people coming here already know what they’re after anyways. Like me 🙂 So this bag had to follow me home.

Then we finally went on to the festival.

The yarn festival itself was huge, a really nice selection of sellers and yarns, accessories and general happiness, creativity and lots of space with tables so sit and meet people and just knit. We arrived after the queues already dissolved and the general mood was more relaxed (I guess in general the first few hours are crazy).

Lots of people were simply enjoying the great weather outdoors with their projects and new and old friends. The only downside that could probably be improved was the enormous queue for the only food stand in the hall, but in general I would warmly recommend this festival to anyone! Next year the festival will be held from 27. – 28. April 2019.

Unfortunately for me I had my three guys in tow, so not much time for yarn shopping (and to be honest, I simply went to meet the girls anyway, as my resolve not to buy even more yarn was already being tested).

But at least I got to meet my group members and also found a familiar face amongst the vendors! Do you remember Christiane Burkhardt from Lismi knits I interviewed last year (Read the interview here)? It was really cool to meet in person and chat!

Our Ravelry group was represented by 10 members, who travelled from different places in Germany (well… and Sweden) to meet up here. And everyone brought a travel-companion 🙂 It was so cool to meet everyone in person!

Now it’s time to knit up the yarns I bought and I’ll tell you more about the rest of the trip later!