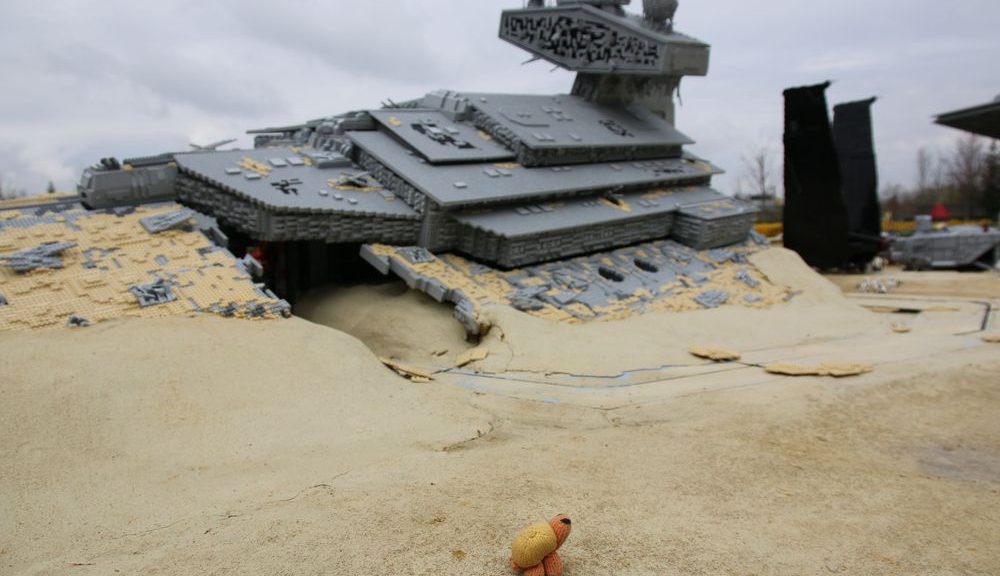 It’s a known fact (at least to Germans) that North and South don’t quite love each other (but in a fun way). So to the Bavarians the Northerners are the humourless *Saupreiß* that don’t talk to anyone but themselves and eat rolled up sour pickled Herring all day (brrr)

and in turn the northern *fish heads* (Fischkopp) believe that life below the Weißwurst-equator consists of German stereotypes (read: Beer, Lederhosen, Dirndl, Weißwurst and Brezn).

Well. There might be some truth to all of this, but Travel Turtle (being from the North and all) wanted to shed some light on the cultural wonders of the South. The first impressions you already read about in the last post (read here) And now it’s time for the rest of it.

So Travel Turtle rolled up her sleeves and moved into enemy territory. To get there she had to fight her way through a fleet of Star Destroyers and single-handedly defeated a few… And even captured a Chicken Walker and somehow made it through…

… the rest of LegoLand without purchasing any Lego that wasn’t on the list 🙂 That was fun!

Something that has always been on my bucketlist was to see the fairytale castles of the South. Namely the one that inspired Walt Disney to his fairytale castle. Neuschwanstein.

Nestled between the foothills of the German Alps this castle was first opened to the public in 1886 after the death of its sole resident King Ludwig II. Today Neuschwanstein is one of the most popular of all the palaces and castles in Europe. Every year 1.4 million people visit “the castle of the fairy-tale king”. In the summer around 6,000 visitors a day stream through rooms that were intended for a single inhabitant (beat that!). I guess it’s not a surprise that we skipped the tourist crowds and hiked around the beautiful Alp lake right next to the castle instead to get some good outside views and fresh air 🙂

While hiking around the lake we were almost on our own, starting at the famous Swan lake (Schwansee) and hiking around the Alpsee for about two hours in the scorching April sun. The lake itself was too cold for a swim, but it was really nice seeing the first bits of green showing on the trees. At one point you can see two castles in the same spot, Castle Hohenschwangau on the left (yellow), and Neuschwanstein on the right.

To get close to the castle means also to get close to the tourist crowds (and gosh, I hate tourist crowds…), but in this case we had to make an exception. So we hiked up the steep road leading up to Neuschwantein to get a closer look at it. You can also take a horse coach up and down the hill but we left that to the poor tourists sweating it with their tour guides and instead doubled as tourist attraction with out kids in their hiking backpacks. (Apparently Asian tourists find this hillarious and used us as photo props…)

So now that we’ve ticked that off our list we resumed to marvelling at touristy places from a safe distance and enjoyed the evening sun with a lovely backdrop.

Being from the North also means being a stranger to the mountains and so mountains have a special draw for me. We spent our days hiking trough the Allgäu, the foothills of the Alps and discovered the scenery for A Sound of Music and Heidi, rolling meadows filled with millions of yellow flowers ending in the majestic snow topped mountains of the Alps. Did I mention the hiking? Yes? Try Pthe beautiful artnachklamm if you are around! It’s a crazy cool gorge that makes for a nice day hike along the gorge (careful, if you’re tall the tunnels carved out for walking close to the river are not made for tall people with backpacks :))

Do you see the people walking the trail? The gorge is about 80meters deep and it looks as stunning from below as it does from above.

After a steep hike up you will be rewarded with the nicest mountain views and you can grab a beer or some traditional food at the Alm (Restaurant) on top before labouring your way down again. Make sure to wear appropriate footwear if you intend on taking the scenic trail, it’s not intended for flipflops or sandals!

So regarding those stereotypes… Yes we saw a few Lederhosen and Dirndls, ate Brezen and steered healthily clear of Weißwurst and Beer, but besides this I found the region extremely beautiful and rich in culture and happy people. That might have been due to the lovely weather, though 😛

For all that hiking I barely got to knit, but I managed at least two more pairs for my husband’s advent calendar socks (read here). Here are pairs number 5 and 6 of 24 (size 47!!) socks… Sigh.

Off to doing some more knitting now!