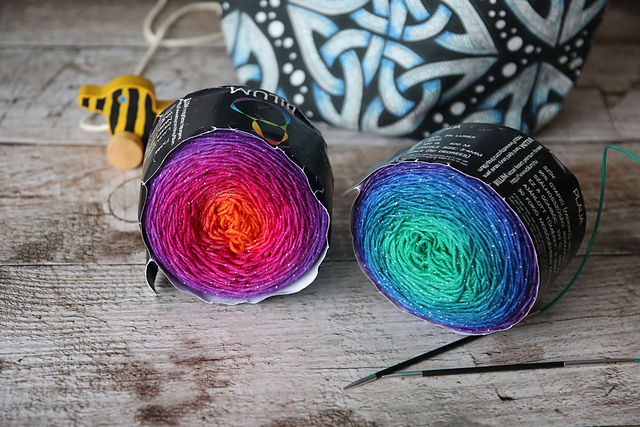 Februari is a soggy business here in Sweden, loads of snow to melt away (if you’re lucky, it’ll stick around a little longer to brighten up your days) and plenty of viruses to catch. Since there is a word for ‘taking care of your sick kids and work from home’ in Swedish called Vab, people like to call February also Vabruari.

We have been having fun with chickenpox twice this month, and are now glad to get that one off our list. And what to do with kids when they are sick, but not so sick that they want to sleep all day? You get out the dyeing pot and kool aid and have fun!

It was great fun, kid #1 called these creations Rainbow, Loo-Toilet and Painted and loves his new socks already!

So I have’t really gotten around to writing a lot on this platform this month, BUT I managed to knit a few things, and even write a new toy pattern (currently in testing). Wow.

My Fo for the #UseWhatYouHaveKAL2019 in February is this cool hat called Cyclone Hat by MyGurumi aka Cinnamon Purl (It’s free on her blog, clickcklick)

It’s a really cool on-the-go project, which fits in your travel bag and doesn’t need a lot of attention.

Knitting the tube was easy enough, but the twisting did not seem super obvious in the beginning.

It helps to know that

1: there will be a hole in the top of the hat.
2: when grafting, the hat doesn’t seem twisted WHERE YOU ARE GRAFTING but rather in the inside of the hat (the hat will get the twisted look once you shake it out after grafting.
3: It’s perfect and really really cool!

And you can wear it on both sides 🙂

It’s so great to see all the cool projects for the KAL growing and see how this inspires us all to knit patterns we already have with yarns from stash! It’s a perfect feeling to try something we usually don’t knit with yarns we usually only look at and pet 🙂 There are almost 80 finished projects in out FO-thread already!

AND we have a winner for February! One of these skeins of prettiness from Schibot Garne …

…goes to Amanda-Abby who made this lovely Roo-loop ! Congratulations and happy knitting!

If you’re curious what you couls win in March, watch this spacce 🙂 I’ll just say this: It’s not yarn 🙂

I’ve also been asked to make another toy for a customer, so I thought to take this opportunity and write down the pattern, so that I don’t forget how I made it 🙂 And also for you toy lovers out there! Don’t you love this little guy?

The pattern is currently in testing, with the first lions already popping up on Ravelry, so not long, my friends, and you can make this little lion yourselves, if you like.

And who doesn’t need a lon in their lives??

But I’ll be back to organising my life now that the kids are ok again and hope that Vabruari ends with the 1st of March! Please.